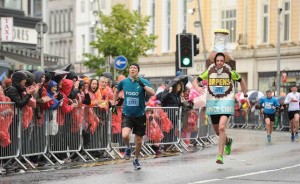 We are absolutely delighted to sponsor Terry in his Guinness world record attempt to complete the fastest ever marathon dressed as a bottle. He has just completed the Cork half marathon in a whopping 1hour 29minutes and is well on track to smashing the current record of 3hours and 31minutes. It just goes to show, you can’t beat a bottle of Orpens. This effort will take place at the Waterford Viking Marathon on June 27th.

Terry will be running in order to raise money for his 1 year old god son Theo. Theo was born with a rare form of deafness due to his auditory nerves fusing. A pioneering surgery is available in Italy to give Theo a bionic ear which will allow him to hear for the first time. Unfortunately this surgery and the subsequent speech therapy are far from cheap so Terry is doing everything he can to help with the cost.

In honour of Terry’s efforts we will be running a weekly competition to win a case of Orpens cider. All you have to do is find Terry and get a selfie with him and submit it to us via Facebook, Twitter or Instagram using the hashtag #WheresTerrry. The prize goes to the best photo of the week. Terry normally trains in the Phoenix park or around the city, we will be giving daily hints on where find him over Twitter.