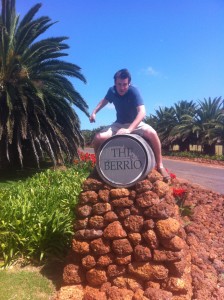 Matt the morning Orpens was born.

Most of us have come up with a “great business idea” after one too many drinks and completely forgotten about it the next day. In Chris Hill and Matt Tindal’s case this was exactly how Orpens cider came to life.

Matt and Chris had known each other for years through their careers in the wine industry and became good friends in the process. Back in 2012 they went on a wine-buying holiday to South Africa. It was there in Cape Town that they met Bruce Jack, founder of Flagstone wines and now Orpens cidermaker.

One night after a couple bottles of red Chris, Matt and Bruce got talking about cider making, a long time hobby of Bruce’s. Chris had been flirting with the idea of setting up a cider business and actually copy written the name Orpens 7 years earlier. Orpens was his grandmothers maiden name, she was the first ever lady jockey licensed to compete professionally against men. As the night went on and the drinks kept coming the three lads began to get more and more excited about the prospect of making a go of it. When Matt and Chris went back to their apartment they decided that in the morning they were going to start putting a plan in place. To all three of their amazement they actually did!

When Chris and Matt went back to Ireland they broke the news to their wives that they were starting a cider company, Orpens. Over the next year they recruited Bruce over from Cape Town, Chris took a cider-making course and all three of them began working on a business plan. The rest is history.